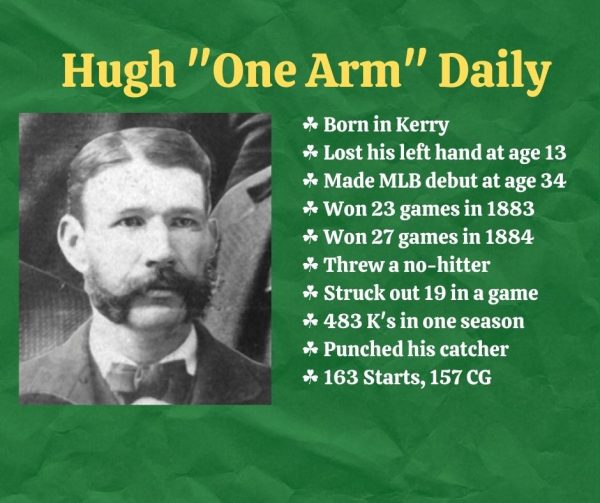 Few pitchers have overcome taller odds than Hugh Ignatius Daily. Being born in Kerry and losing his left hand as a teenager made Hugh’s dream of pitching in the big leagues all but impossible.

Yet, in 1882, after years of struggling in the minors, Hugh finally got his chance to pitch at the major league level. Depending on who you asked, he may have been 34 or 35 years old at the time.

By 1883, Hugh was one of the top pitchers in the National League:

“In his second big-league season, Daily pitched for the Cleveland Spiders, for whom he threw a no-hitter on September 13, 1883. Back then, five-man starting pitcher rotations were nonexistent; in fact, teams tended to rely on just two starting pitchers. So, as his team had a double-header the day after his no-hitter, Daily pitched once again, and surrendered just one run. He finished the 1883 season with an ERA of 2.42, which was fifth-best in the league.” –IrishAmerica.com

Over the course of his major league career, Daily completed 157 of his 163 starts for a completion percentage of 96%, a record that may never be broken. He also struck out 19 batters in a game, a record that lasted for a century. In 1885, he jumped to the upstart Union Association and struck out a league-high 483 batters.

Daily’s reputation and on-field outbursts were such that he was never re-signed by a team, despite being a top pitcher for several years. Following his major league career, he spent several years pitching in the minor leagues. By his late 40s, Daily had made the transition from minor league pitcher to minor league umpire.

By the turn of the century, Hugh Daily had disappeared from public life. He was last seen in Baltimore around 1920. There is no known record of his death.