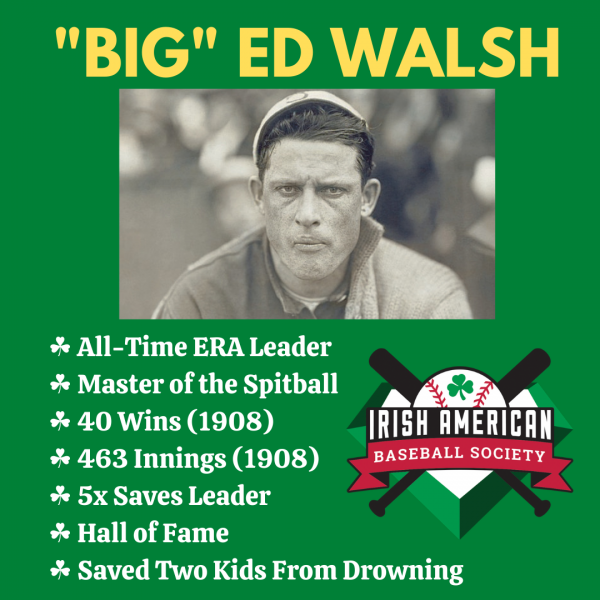 Growing up in Plains Township,
Pennsylvania, Jane would sing Irish folk songs to Ed and his 12 brothers and sisters.

When he was 18, Ed began pitching for a local semi-pro team. He signed his first minor league contract the following year.

Big Ed began his major league career in 1904 with the Chicago White Sox. After some moderate success, he began tinkering with the spitball, which was still a legal pitch at the time.

Soon, “Big” Ed mastered the spitball and he was on his way to becoming a legend.

Here are just a few of his accomplishments:

According to Wikipedia, “Walsh averaged 24 victories and 220 strikeouts and posted an ERA below 2.00 five times. He also led the league in saves five times in this span. His finest individual season came in 1908 when he went 40–15 with 269 strikeouts, 6 saves and a 1.42 ERA.”

In case you missed that, he led the league in saves FIVE TIMES. In each of those seasons, he was a starter.

When Big Ed’s arm started to fail him, he picked up side work as a superhero. He saved two kids from drowning in Lake Michigan in 1916.