The First Baseball Game in Dublin, Ireland in 1874 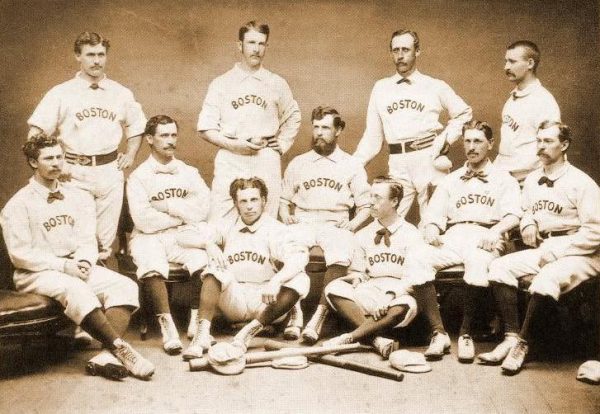 In tracking early Irish interest in the game of baseball, I was drawn to the efforts of Irish-American Fenians to make the game a staple at organizational picnics and gatherings. This early association is perhaps unsurprising, given the strong representation of Irish soldiers in both the Union and Confederate armies during the late Civil War. In the decades that followed, Fenian clubs sprung up across the country, at a time when participation in organized sports was growing exponentially, owing to the “Muscular Christianity” movement, which stressed the tenets of patriotic duty, masculinity and self-discipline. On the back of the Gaelic Cultural Revival which took hold in Ireland during the 1880s and 1890s, some commenters came to see baseball as a potentially de-anglicizing activity, owing to its seemingly shared history with the game of rounders. Most notably, Irish-American businessman Richard Burke proclaimed: “If we revive the old Irish game of rounders in Ireland in its modern form…In a short time we would see as little cricket in Ireland as in America. If it is taken up enthusiastically by the young men of the country…in a few years we shall see the champion baseball nine of Ireland challenging the United States for the championship of the world.” 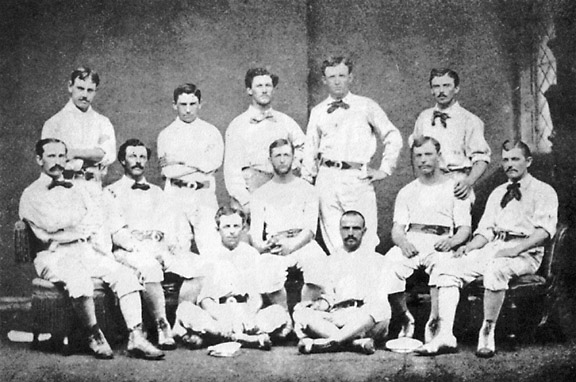 However, it appears that Burke was unaware that such a contest had (somewhat) already taken place on Irish soil over two decades earlier. In the dog days of summer in 1874, the Boston Red Stockings and Philadelphia Athletic Club, two of the original teams in the National League, set sail across the Atlantic to carry out a promotional display of the game in the heart of Dublin. That season, the Red Stockings, billed as “the champion club of America” sat atop the league with an astonishing 52-18 record, while the Athletics finished third at a solid 33-22. The spectacle, which drew sizeable crowds, was played over three days, between August 22nd and August 25, with the two teams playing inter-squad exhibitions and a highly anticipated match against a group of Ireland’s best cricketeers. Foreshadowing Burke’s later premonition, the contest was billed as “The base-ball match between America and Ireland”.

In the runup to the contest, one report reflected: “In America its popularity is unrivalled, and exceeds anything that can be said of any game in England. The professionals command salaries far above those paid to batsmen or trainers in Great Britain; and it is quite possible that should the game take here we may count upon a permanent addition to our manly pastimes, and to that band of teachers whose influence in this generation is becoming paramount.” In the marquee game, a selection of players from the Boston and Philadelphia sides squared off against the Irish team, which consisted of six members of the Dublin Cricket Club playing alongside three of the Americans, including future Baseball Hall-of-Famers George and Harry Wright. Amongst the other notables on the Irish team was Henry King-Tenison, the 8th Earl of Kingston. Attempting to further even the sides, the game was played under an adjusted set of rules, whereby the Irish team was allowed five outs-per-inning to the Americans’ three. The rule did little to help the hosts. The “All-American” team, which featured Cavan man Andy Leonard, for whom the Irish Baseball League’s annual most valuable player award is now named, easily won by a score of 12-6.

Following the international contest, the two national league teams played a number of exhibitions to great enthusiasm from the local crowds, before venturing back to Cobh to get their return steamer to New York. The promotional tour went off without incident, save for Athletics pitcher Dick McBride suffering a broken thumb. Given the game’s early success in Ireland as displayed over the three days, it is not abundantly clear why it did not catch on. Ironically, given Burke’s later claim that the “introduction” of Baseball might provide a means by which to dull the influence of “foreign” games, the founding of the Irish Hurling Union in 1879 might have contributed to the demise of any earlier traction that America’s pastime had gained. The Union sought to revive the ancient Irish game, by drawing up “a code of rules for all clubs in the union and to foster that manly and noble game of hurling in this, its native country.” Such efforts were further cemented in 1884 with the foundation of the Gaelic Athletic Association, almost ten years to the month after America’s big leaguers walked Dublin’s streets. Baseball’s close association with cricket during its first barnstorming tour might have been the cause of its failure on Irish soil. One wonders what might have happened if the teams, visiting a decade later, had squared off against a selection of Ireland’s hurlers?

Patrick J. Mahoney is a Caspersen Fellow in History and Culture at Drew University. He is the translator and editor of Recovering an Irish Voice on the American Frontier: The Prose Writings of Eoin Ua Cathail (University of North Texas Press). Patrick is also a long suffering Cincinnati Reds fan. You can contact him on twitter @PatrickJMahone1.