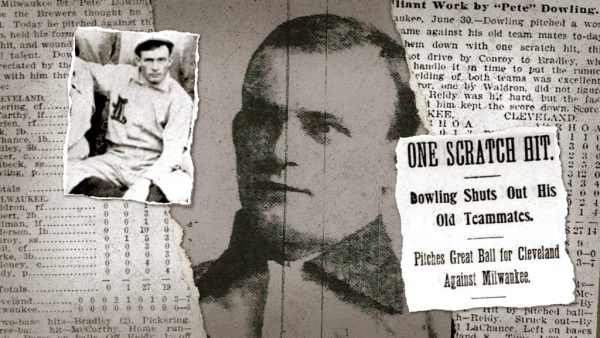 Irish southpaw Pete Dowling has been credited with a no-hitter, 119 years after the fact! Credit: MLB.com

An Irishman has been credited with the first no-hitter in American League history, 119 years after the fact!

Earlier this month, the Society for American Baseball Research (SABR), Retrosheet, and Major League Baseball announced that Cleveland Blues southpaw Pete Dowling has been credited with throwing a no-hitter in a game on June 30, 1901:

On June 30, Blue manager Jimmy McAleer sent Dowling out to face his old team in Milwaukee. In a 7-0 complete game victory, he walked four and hit one batter, but the only other baserunner was Wid Conroy. In the seventh inning, Conroy sent a sharp ground ball in the direction of Cleveland third baseman Bill Bradley, who failed to make the play. That’s where the controversy began.

According to SABR researchers, the correspondent for the local paper, the Milwaukee Journal, put the play down as an error on Bradley and gave Dowling a no-hitter. But the next morning’s article in the Cleveland Plain Dealer called it a scratch single, and credited Dowling with a one-hitter. The Cleveland article was the one that came to the attention of that age’s baseball correspondents, who accepted Dowling’s performance as a one-hitter.

For such a seemingly straightforward issue, the question of the author of the AL’s first no-hitter has been a surprisingly fluid topic for debate over the years. For most of AL history, it was assumed that another Cleveland pitcher, Earl Moore, had thrown the league’s first no-hitter. Call to the Pen

Now, the details of what exactly happened during the game may be debated, but one thing is for certain: Pete Dowling was the son of Irish immigrants:

“Henry James Peter Dowling started life on July 15, 1876, in St. Louis, the first of seven children born to Irish immigrants Michael J. and Ellen Dowling. According to the 1880 US Census, Michael was employed as a laborer, while Ellen took in washing and ironing.” SABR

And Dowling wasn’t the only Irish American on the field that day:

A brief spell in charge of the Washington Senators led McAleer to initiate what became a famous baseball tradition. On April 14, 1910, he asked the visiting president William Taft to throw out the first ball of a season opener. President Taft, an ardent baseball fan, readily agreed, and an integral American tradition was created thanks to McAleer’s quick thinking. Irish America