Ted Sullivan: The Barnacle of Baseball 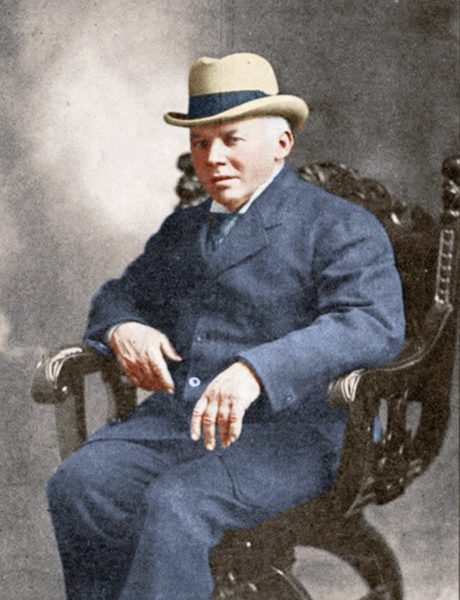 Ted Sullivan, baseball promoter, hustler and Irish rogue would have felt right at home on this particular late-winter afternoon. He would have pulled up a seat in a dark Kansas City saloon, swapping baseball stories with the authors of their new biography ‘Ted Sullivan; Barnacle of Baseball’, by Tom Coffman and Pat O’Neill.

In the late 19th Century, as modern baseball was developing, Ted Sullivan was helping it grow.

Sullivan would have dominated the conversation with his new author friends. Charming them with stories of how he once faked the death of his pitcher during a game, so he could make a substitution. At the time, baseball did not permit substitutions. Perhaps a tale of how he took major league teams on exhibition trips to Ireland and the rest Europe attempting to establish baseball on the Continent. Or why Sullivan believed for years before it happened, pitchers didn’t need to bat. 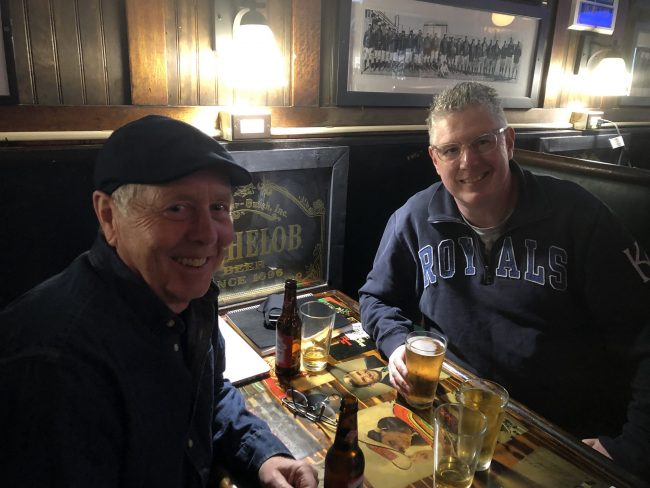 Both Coffman and O’Neill had heard a few stories of Sullivan’s now-obscure role in the early days of baseball. Almost each one sounded like a tall tale.

“Years later, Tom and I were drinking a beer and said, he’d be a good story,” O‘Neill said.  Coffman agreed.

Coffman and O’Neill have written a book uncovering one of baseball’s genuine characters.  Sullivan was an influence on baseball at a time when the major leagues as we know them now, were just forming. The National League formed in 1876. The modern American League was decades away. Organizations like the American Association, the Union Association, and the Players League tried, and failed to develop into a rival major league. Often, Ted Sullivan was in the middle of it.

In the late 1800’s as many cities and towns were trying to grow, they believed having a professional baseball team as a local source of summer entertainment marked their coming of age.

This was Ted Sullivan’s world. Batted balls were considered “outs” if fielded on one hop.

A time when pitchers threw under-hand. Batters called for their pitch to be thrown at a certain level over the plate. Batted balls were considered “outs” if fielded on one
bounce.

Sullivan, born in Ireland and raised in Milwaukee loved the game since he was a boy. He organized his first team when he was still a teen-ager. It was a time when the nation’s Irish immigrants played a major role in developing the game.

“It was their way to assimilate. They were immigrants, or sons of immigrants. You played baseball because it was America’s game, the national game,” said O’Neill.

The authors offer a typical quote from Sullivan about the managing of many Irishmen in baseball at the time:

“Read my list of players, O’Connor, O’Hagan Driscoll, Boyle. Reads like the register of a Donegal ship, eh?”

Coffman and O’Neill say records of Sullivan’s baseball adventures are sprinkled throughout the archives of long-gone newspapers. Knitting Sullivan’s life into a charming and sometimes laugh-out-loud book, turned them into detectives.

“We probably looked at close to 3,000 newspaper articles by him, or about him,” said O’Neill.

There is no question Sullivan’s biggest break came in the mid-1870s at tiny St. Mary’s College in Kansas, where he played ball and became good friends with Charles Comiskey. Sullivan, from Milwaukee, and Comiskey from Chicago, bonded over baseball. They remained friends and baseball promoters for life.

Comiskey went on to play as well as manage in professional baseball. He was the founding owner of the Chicago White Sox. Both he and his pal Sullivan were instrumental in the start of the modern American League.

Throughout his life in baseball, Sullivan had a sharp eye for baseball talent. Coffman and O’Neill make an effective case that Sullivan was among the first, and perhaps the best baseball scout of his era.

The Barnacle of Baseball (a moniker given Sullivan by the legendary sportswriter Damon Runyon) goes into how Sullivan started the first minor league feeder to a big- league club.

“It was 1887-88, and Sullivan was managing the Troy (NY) Trojans, which served as a feeder team to the Washington Senators, shuttling players back and forth,” said Coffman.

The Washington sportswriters said there was so much movement between the teams it felt like Sullivan was managing both clubs at once.

Coffman and O’Neill also think Sullivan was a baseball visionary. In the 1880’s, Sullivan predicted the Designated Hitter. Coffman found a quote from Sullivan stating no one wanted to see a pitcher bat, because, as he liked to say, “They’re a bunch of whippoorwill swingers.”

Sullivan is credited with the idea of having the first baseman play away from the bag, to improve team defense. Until then, the first baseman (usually an older, slower player) literally stood on or next to the base, waiting for teammates to throw over to him for the force out.

The authors say Ted Sullivan invented the word, “fan” for the sport’s most devoted followers. It was a derivative of the word “fanatic.” Until then, newspapers often described most people who went to games or followed the sport, “cranks” or “bugs.”

O’Neill says Sullivan also coined the phrase “getting canned” for losing a job. If a player was let go, Sullivan was known to tell the ballplayer he should alert his wife to get his lunch can ready. He was coming home to look for another job.

Their book tells of Sullivan marketing players like they were modern day professional wrestlers. As early as 1910, Sullivan opened an office in downtown Chicago, and proclaimed himself a broker of ball players. The headline in the Chicago Examiner read: “HIRE YOUR PLAYERS AS YOU DO A COOK.”, “

There’s a yarn about Sullivan claiming he found a killer pitcher in the Texas League that was a former Texas Ranger with 250 notches on his gun. Not true.

“He found a Native American pitcher named Gus Mackey, who played ball at Haskell Indian College,” says Coffman. “Sullivan renamed him, ‘Wolf-Eating Bear,’ known for his prowess with the scalping knife. When in reality, he was just a nice young guy from Lawrence, Ks.”

The ‘Barnacle of Baseball’ reveals one of Sullivan’s life-long skills; being a “conologist.” Sullivan would be the salesman who could talk local investors into putting up money to form a team. In many cases, he would gather several sets of local investors from nearby cities and towns and create a league. He would often get the locals to hire him as player/manager or the squad’s general manager.

Coffman and O’Neill’s book has many accounts of Sullivan’s teams, or his leagues, collapsing in mid-season.

“If it wasn’t working, he’d blame the town and leave,” said Coffman.

O’Neill calls him “the Harold Hill’ of baseball, referring to Meredith Wilson’s good-natured, but crafty traveling salesman in the play and movie “The Music Man.”

Sensing the end was near was a Sullivan skill. It happened frequently. So he would always be on the next train out of town, just before investors started figuring out they’d been conned.

“He’d come into town, start a team. Start a league. And somebody was usually left holding the bag,” according to Coffman.

One story in the book tells of a sunny Sabbath Day at a ballpark outside of Washington, D.C. The sheriff local came to the ballpark looking for Sullivan, to enforce the law prohibiting games on Sunday. In those days, managers did not wear uniforms. They wore business suits.

Sullivan learned the sheriff was coming, so, he joined a group of real legislators watching the game. When the sheriff came looking for him in that group, he passed himself off as just “another Senator,” and treated the southern-born lawman to some of Kentucky’s favorite product before slipping back out to the field to manage his nine.

While most of Sullivan’s teams and leagues came and went, Sullivan’s early involvement in starting the Texas League (which still exists) is another sign of his lasting impact on the game.

O’Neill and Coffman write in a style that fondly brings up the long-gone language of baseball sportswriters. Of a time when scribes wrote of “hurlers,” who “toed the slab,” as a ‘batsman’ awaited a pitch. There are many quotes included in the book from the old sports pages illustrating the colorful vernacular of the day.

When the authors use the same language, it’s not wooden. Because it’s not over-used. Their use of the phrases and the sports page quotes give the book an occasional time capsule feel.

Pat O’Neill’s and Tom Coffman’s biography of Ted Sullivan is a story of baseball’s very early days. It’s clear Sullivan was present at important parts of the creation of modern major league baseball. It’s also quite clear he saw it as a quick way to make good money.

His role and his story, however, have faded in history. To learn more about Ted Sullivan and the new book, “Ted Sullivan: Barnacle of Baseball,” visit the McFarland Books website.

Micheal Mahoney was born in Dublin; he was adopted by his American parents and arrived in the United States in December 24, 1954. He is the political reporter for KMBC TV in Kansas City, Missouri and the former President of the Board of the Kansas City St. Patrick’s Day Parade. He roots for three baseball teams; the Royals, the Cardinals and whoever is playing the Cubs. Micheal Mahoney, Tom Coffman and Pat O’Neill are members of the Irish American Baseball Society.