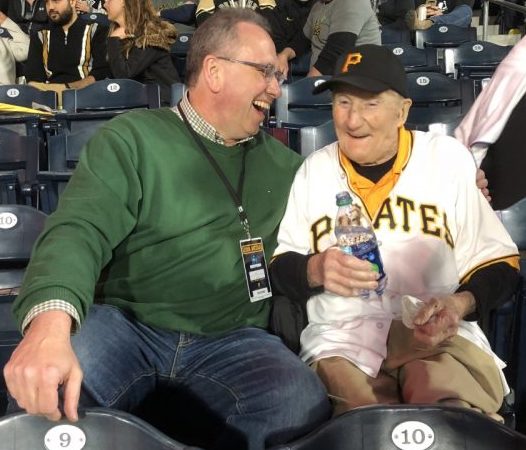 I first met Phil Coyne 20 years ago at PNC Park in Pittsburgh. He was an usher entering his 65th year with the Pirates.

I was Phil’s supervisor, even though it was my first year with the organization.

Phil’s Section 26 was on the third base side, close to field level. It quickly became my favorite stop as I made my rounds around the ballpark. Phil was always happy; he was never in a bad mood and he never said a bad word about anyone, ever.

Phil was an amazing Irish storyteller. His family history was fascinating: his father was one of 17 children raised in a small cottage in County Galway near The Quiet Man Bridge. Trips to Ireland and his family trip each summer to Rehoboth Beach were always highlights for him. And he lit up whenever he was talking about his big Irish family.

I always hated rain delays, but the one bright spot was that it allowed me to catch up with Phil. He would hold court and tell story after story. Our conversations covered much more than sports — I learned about Ireland, world history, politics, religion, family, you name it. Phil remembered it all.

Phil’s baseball knowledge was unmatched. Not only did he know baseball history, but he had also lived it:

I also worked with Phil for a few years at Heinz Field. Phil had been there for all of the Steelers’ championship seasons. Steelers owner Dan Rooney would seek Phil out each week to catch up with him.

People sought Phil out because of the kind of person he was. He was so much more than just the man who witnessed everything. He was a genuinely good person. He ALWAYS asked about you and your family first. Whenever I saw him, it was always, “How’s Mom? How’s my girls?”

The thing about Phil was that he genuinely cared about your answers. My girls absolutely adored Phil. And he always remembered what they were doing, what upcoming events they had. Everything.

On April 27, 2018, the Pirates celebrated Phil’s 100th birthday. I was fortunate to be in the locker room and on the field with him during the celebration. More than a hundred members of his family came from all over the United States and Ireland. The Baseball Hall of Fame requested his uniform to place on a permanent exhibit. Topps even issued a Phil Coyne baseball card! It was a great day for him.

Phil never worked at PNC Park after that day, but I still tried to keep in touch.

I had a hard time getting in touch with him. Phil had an old-school answering machine. After a while the machine was full and it wouldn’t take any more messages. Then, late one Friday night before Christmas, my phone rang. It was Phil’s number. I feared that something had happened to him until I heard that familiar voice.

He was 102 years old and sharp as a tack. It was amazing, really. He told stories, as usual, and he asked about everyone by name. We talked for about 20 minutes. It was our last conversation. 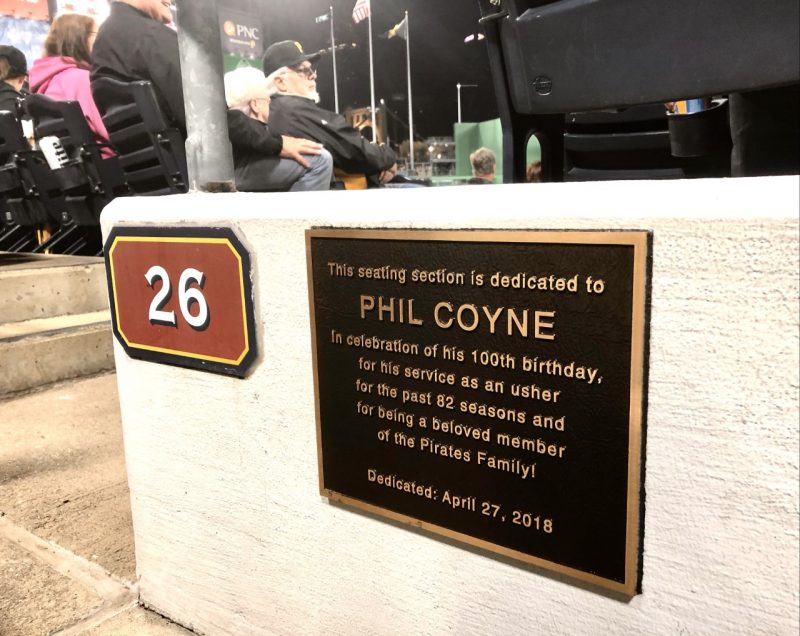 Phil Coyne worked 81 seasons for the Pirates. Today, a plaque in Section 26 honors his legacy.

I can’t explain how fortunate I was to have Phil assigned to my area on that day 20 years ago. It led to a true friendship with one of the greatest people I’ve ever known. If we all could try to be a little more like Phil, the world would be a better place.

Pat Shaffer is a member of the Irish American Baseball Society. He is a former Ballpark Operations Supervisor for the Pittsburgh Pirates.  He is currently an Account Executive with Gray Television at WDTV, the CBS affiliate in Clarksburg, WV.