Ben Geraghty was the grandson of immigrants from Donegal. He was also an accomplished minor league manager who made a lasting impression on Hank Aaron. The following article was submitted by Geraghty’s nephew, Michael Geraghty: 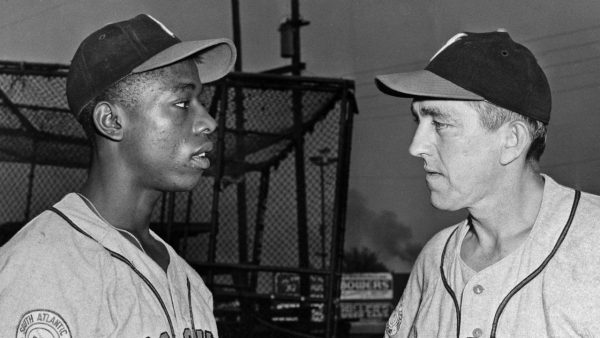 I remember back in middle school I had the opportunity to bring in something very valuable to me for “Show and Tell.” I decided to bring Hank Aaron’s autobiography, I Had a Hammer. You see, my family had a special connection to this baseball great.

My Great Uncle had the pleasure of managing him while he was a player on the Sally League Team, Jacksonville Braves. I attempted to explain to the class the character of these two men that have made an indelible mark on me. When my classmates heard me mention the name Hank Aaron, a few of them shouted, “That’s the guy who broke Babe Ruth’s record right?” Nodding my head with a grin, I replied, “Yes, but he was so much more than that.” Indeed, he was.

Flash forward to January 22, 2021 and now the man who I once thought was immortal, is gone. It was my father who texted me that day to notify of his passing. I just remember being overcome with emotion for a moment. It was a somber day and a day filled with regret. I always wanted to write to Hammerin’ Hank to get more insight on his relationship with my great uncle Ben Geraghty.

In his autobiography he says “I had a lot of heart-to-heart talks with Ben Geraghty, the manager of the Jacksonville Braves in 1953. Many of them had to do with breaking the color line in the Sally League, which I did along with teammates Felix Mantilla and Horace Garner and two black players for Savannah.” Growing up a Geraghty, I heard this story many times over the course of my life and it just spoke volumes for this Benny’s character. It was virtually unheard of for a white baseball manager to have that type of relationship with a black baseball player at that time.

Under the tutelage of Benny, Hank went from a shy 19-year old second baseman to becoming the starting left fielder for the Milwaukee Braves the next season. The rest is history.

The greatest baseball player who ever lived had faced tumultuous hardships when he broke the color line. It was a dark time in America. A time when you could be refused service based solely upon the color of your skin. It was a time when baseball fans still had a problem with an integrated league. 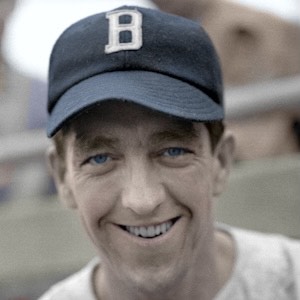 Ben Geraghty saw past this facade. He was a different breed. His life was consumed by baseball and developing young players. The Braves organization counted on him to instill not only a sound work ethic on his players, but also sound character. According to Pat Jordan’s A False Spring, “His players spoke of him with an awe and reverence one associates not with a minor league manager who had enriched their careers, but with a man who had enriched their lives in a way that had nothing to do with baseball.”

Baseball is not just about strategy and how you can perform on the diamond, it can change your whole perspective on life. Benny knew this to be true. His work ethic rubbed off on his players and coaches alike. A transcendent figure who was way ahead of his time and what I would call a baseball Aristotle. He was always prepping his team for different scenarios; they would face at the plate and in their lives. He took a different approach to managing than most, investing time in their day-to-day routine on and off the field.

The player Benny admired the most just so happened to be Hank Aaron, a young African American phenom who was a sponge to learning the game and would eventually become a first ballot Hall of Famer. I believe what attracted him to Hank the most was not only his baseball IQ, but his humble personality, something that is intrinsic to the game of baseball.

Benny became convinced that there was no flaw in this young man’s make-up. He fought for him and other young players of color who had strikes thrown at them just because of their race. He didn’t want to live in a country where people of different races could not coexist. Often when he traveled with the team to cities in the Deep South, he saw the ugly side of human nature where his own players would be denied service at a local restaurant because of their race. This was contrary to everything he believed in. He would never bench someone because of their race, so why couldn’t they eat at certain establishments? In his eyes this was downright preposterous.

You cannot judge a man by his skin color, and it didn’t take a genius to realize this at the time. Instead, it was a scruffy minor league manager from Jersey City. Benny would purposely go to the finest restaurant in the city and invite a young Hank with him to dinner. The restaurant manager probably looking at Benny as if he had landed from another planet, frantically would refuse service. This became a routine in each city that he and Hank went to. Benny would take Hank with him to the nicest restaurant, they would be refused service, Benny would argue until his voice was faint then quickly retreat to the next best restaurant where the next restaurant manager would proceed with another bigoted reply.

If only I were a fly on the wall to hear that conversation go down. I can imagine this had to infuriate patrons, but it definitely made an impression on Hank. Facing adversity alone is a very scary thing for a 19-year-old but facing adversity with an ally had to be reassuring. I couldn’t imagine facing all this hatred and vitriol at such a crucial time in my life. I know for a fact that I would not have handled myself the way Hank Aaron did. The future civil rights champion must have known that better times were ahead. I like to think Benny’s actions during that year had an impact on him and others to stand together for what is right and fight like hell for a better future.

Hank Aaron is not a baseball legend. He is a baseball God. His baseball prowess was extraordinary and unmatched. Breaking the Babe’s record after so many years was no easy feat. It is almost like possessing superhuman powers to be that good over such a long-time span.

I remember finishing up my Show and Tell session with a quote in Hank’s book I Had A Hammer. In his eloquent fashion he stated this about Benny: “To this day, I believe that he was the best manager I ever played for.” These two men had the uncanny ability in making those around them better. That’s a quality that is hard to find in sports nowadays. Benny makes me proud to carry the name Geraghty on to my children.

Hank always made me excited about baseball regardless of the connection. His influence on the game was so great and will live on for eternity. Sometimes I wish Benny could have lived to see just how good Hank became as a player and how far we have come as a country. Being a world class athlete was just one quality that Hank mastered. I’d like to think that being a world class person was his best trait.