Irish Ambassador: “Why Not Baseball?” 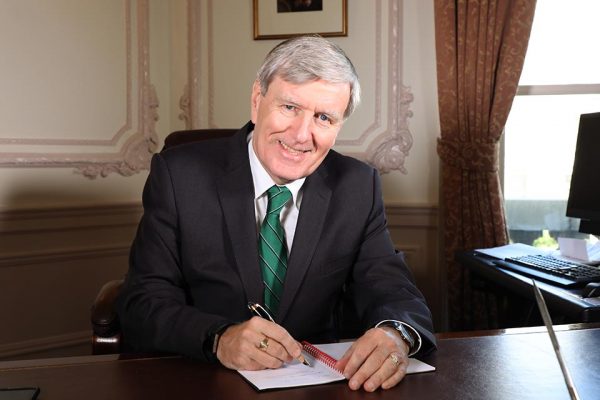 “I understand Croke Park is big enough to house a cricket oval, so why not baseball? Wouldn’t a Major League game between the New York Yankees and the Boston Red Sox in Ireland attract a huge crowd? You’d fill Croke Park. Irish people love sport generally, the novelty of a proper baseball game would surely appeal.” – Ambassador Daniel Mulhall

Ambassador Mulhall, who hails from Waterford and is an avid hurling fan, also thanked the Irish American Baseball Society for our efforts in preserving the history of baseball in Ireland and pointing out the long history of Irish influence on the game of baseball in America.

“The Irish-American Baseball Society, which is very active, reminded me that baseball was played in Waterford and other places in Ireland during the 50s — there are newspaper cuttings about games between Waterford and Tramore, including games played in Walsh Park.”

“I’m going to look into this. The Irish-American Baseball Society have pointed out that a lot of the early baseball stars were Irish or Irish-American — and perhaps that was because they were used to a flying ball from playing hurling, I’m not sure.”