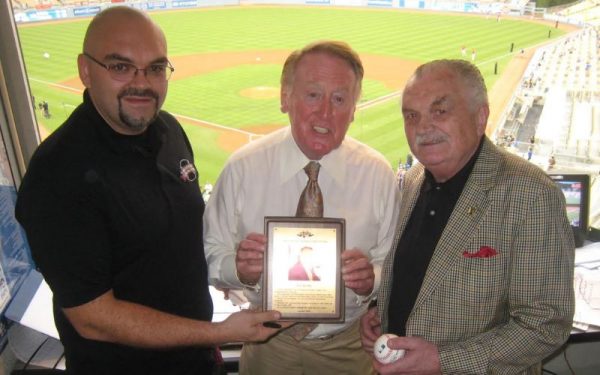 I didn’t grow up here in America. So, I don’t have the stories about going to bed as a kid, listening to Vin Scully with the transistor radio. But as I became more and more aware about baseball, I came to appreciate Vin Scully from hearing snippets and highlights of his famous calls.

During the baseball season, when there were nights that I could get out of Foley’s at a decent hour, I always made sure to leave around 10 o’clock, so that I could listen to him do the first three innings of the Dodgers game. Soon, I was listening to Vin any chance I got. He was that good.

My favorite thing about Vin was the way he could weave seemingly random bits of information into the story. It was as effortless as it was magical. You may not remember who the Dodgers played on a given day during Vin’s incredible 67-year career, but if you listened to his broadcast, you may remember something he told you that day.

To this day, I know that Todd Hollandsworth’s sister was a golfer at Virginia Tech. I also know that Todd Zeile is a direct descendant of John Adams and John Quincy Adams. I know these things because Vin told me so.

Long before Foley’s — long before the Irish American Baseball Hall of Fame — I was living in Long Island City, New York, with my father. One day, I had just returned from a trip to Milwaukee. My father was on the computer.

“Do you know some guy called Vin Scully?” he asked.

What a question. I thought about it for a minute.

I knew my father couldn’t be talking about THE Vin Scully. So, I racked my brain, trying to think of anyone I knew named Vin Scully.

My dad was confused. “He has something to do with baseball. You sure you don’t know him?”

My father explained that Vin’s grandmother and my great grandfather were brother and sister. So, we were cousins.

Cousins! This was exciting stuff! But how could I explain Vin Scully to my dad?

In Ireland, the most iconic sports commentators were guys like Michael O’Hehir and Mícheál Ó Muircheartaigh.

“He’s like those guys,” I started to explain. “Times infinity.”

I guess my explanation struck a chord because my father starts telling me stories of rounding up chickens for Vin Scully’s uncle on a farm in Ballyconnell. Except he doesn’t call him “Vin Scully’s uncle” — he calls him “this guy Freehill.”

“This guy Freehill” was the brother of Bridget Freehill of Ballyconnell.

Fast forward to 2009. I owned my own bar, Foley’s and we had just started the Irish American Baseball Hall of Fame. From the start, we wanted to induct Vin.

I was talking with former Dodgers owner Peter O’Malley, another proud Irishman, about my idea to induct Vin. I told Peter I wasn’t sure if it was the right time because Vin wasn’t traveling anymore. If I remember correctly, the furthest he was traveling with the Dodgers was Colorado. There was no way he’d be traveling to New York for his induction.

Peter said, “Shaun, I think you should induct Vin. It’s a great idea and he certainly deserves it.”

And so we did.

Out of the Blue

A few months later, out of the blue, Peter O’Malley calls me and says, “Hey, I had I had lunch with Vin the other day. And he said he would be delighted if you would come and meet him in California.”

So I got my father and we went to California. We flew into San Diego and we drove up to Los Angeles.

When we got to Dodger Stadium, Peter led us up to the press box to meet Vin. Vin looked up and said “Oh great! It’s my cousin’s from Ballyconnell!”

I presented Vin with his Hall of Fame plaque. Everything that everybody has ever said or written about him is right on the money. Vin was graciousness personified.

People always ask me what I talked about when I met Vin. It’s a great question. I mean, Vin Scully is not only Mr. Dodger but he’s also Mr. Baseball. He’s seen it all and done it all. And here I am — I’ve got 6 million baseball questions — so where do I even start?

But before I got the chance, Vin said, “Tell me more about my uncle.”

So, my father told him all about herding chickens for Freehill. Then, he told Vin a story about meeting his mother in 1947. “Your mother had come down from Ballyconnell and my mother made tea. She was a lovely woman.”

So, when people ask what I talked about with Vin Scully, I say, “I talked about Vin’s uncle raising chickens on a farm in Ballyconnell.”

My time with Vin wasn’t long but he certainly made an impact on me, as I’m sure he did with countless others.

I had always hoped to catch up with Vin one more time. Obviously, that didn’t work out for many reasons. But I’m very thankful for the short time when I was able to meet him. And I’m so glad we did induct him into the Hall. Vin is the personification of what the Irish American Baseball Hall of Fame is all about: proud of his roots in Ballyconnell, an incredible career in the game of baseball, and he definitely was, without a doubt, one of the good guys.